Seven of New Zealand’s universities took part in the conference, which attracted more than 1,400 delegates, representing 56 nationalities.  The university delegates engaged in panel discussions on a range of topics, including ethical counselling and preparing for education abroad, which were well attended. Education New Zealand Manapou ki te Ao (ENZ) led the New Zealand delegation as a gold sponsor of the event.

Launched in 2016, IC3 is the largest platform for connecting high school career counsellors in India with tertiary education institutions. The conference brings together school leaders, teachers, counsellors, universities, education organisations, government bodies, industry leaders and others with an interest in sustainable and inclusive counselling, focused on student success.

Jugnu Roy, ENZ’s Director of Engagement based in India, says participation in the annual conference is valuable for ENZ as well as for the universities involved.

“High school careers and college counsellors are key influencers for students in India when it comes to making choices about tertiary study and future careers. This event has been a great help with building our connections with schools across southern India, so we can develop a pipeline of international students interested in undergraduate study in New Zealand.

“The timing of the conference worked well as an opportunity for branding, visibility, and reconnecting with Indian schools soon after the opening of New Zealand’s borders. This was the first time we had been able to attend in person for two years. 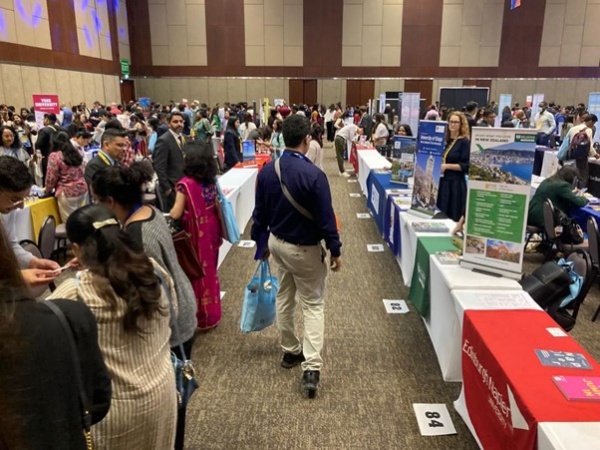 New Zealand universities interacting with schools at the networking session.

“Our participation in the event has already led to increased interest in a New Zealand education among high school counsellors, who are keen to invite New Zealand institutions to their schools for university fairs and to meet with students.

“In a country like India, where many countries are trying hard to attract international students, New Zealand’s presence sends a strong signal that we are committed and here to stay.”

For more information about the conference, see the IC3 Conference website here.