The Ministry of Education has recently made some management changes in its International Division, and appointed Emily Fabling into the new role of Director International in May 2015.

You can meet Emily at the New Zealand International Education Conference in Hamilton this week, but in the meantime, E-News caught up with the Ministry’s busy new Director and asked her a few introductory questions.

You’ve been in the job three months now – tell me about the path that led you to your new role as Director, International Education at MoE.

I grew up in Waipukurau, central Hawke’s Bay.  I studied the only foreign language available to me, French, and hung out with the only ‘international students’ at the time – Rotary Exchange students from Australia.  I actually started my government policy career in the Ministry of Education back in 2001 (when there were 79,000 international students in New Zealand), after having worked at Parliament and for MFAT in the APEC Taskforce, and some typical Kiwi overseas experience in the UK and through Asia.  I moved into Immigration Policy in the then-Department of Labour (DOL) in 2004, where I was responsible, among other things, for developing the licensing regime and legislation for immigration advisers and agents. 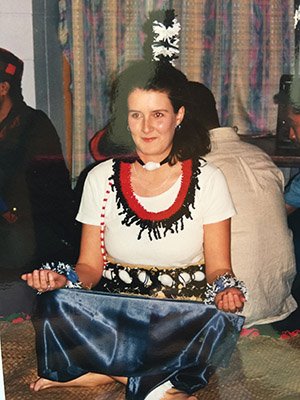 I became Deputy Director, International for DOL in 2009 and focussed my international engagement efforts there on the International Labour Organisation and bilateral labour agreements with Thailand, the Philippines and China, before taking on the role of National Manager, Recognised Seasonal Employment for almost three years (bringing Pacific Island workers to New Zealand’s horticulture & viticulture sectors for temporary seasonal work).  This role was an amazing opportunity, where I travelled to far-flung developing countries like Tuvalu and Kiribati, and experienced, first-hand, the life-changing impacts of time spent in New Zealand on individuals and communities back in the Pacific Islands.  I then spent six months back at MFAT (in the Asia Pacific Regional Division), before returning to the immigration fold and the Immigration New Zealand leadership team, as Executive Director in the Office of the Deputy Chief Executive for two years.  And now I am here!

What study/work/life experiences do you bring to the role?

At Victoria University, I studied Politics and Modern Languages (French & Japanese), and then combined these into an Honours degree in International Relations.  My public service career has followed an underlying thread of “international people mobility” – be it through skills and knowledge, or work and the labour market.  I’ve grown into broader public sector leadership roles from jobs in pure policy analysis and development.  I’m an extrovert, so enjoy presenting policy ideas or strategies to others – I’m also an eldest child and heavily results-focussed, so I like getting things done and working with others on the challenge of turning policy ideas or problems into pragmatic, sensible solutions.

Outside of work, I live in Wellington’s northern suburbs with two cricket and PlayStation-mad sons (aged 10 and 7), two Labradors (aged 12 ½) and a husband (age undisclosed), a large garden and similarly-sized mortgage! What’s on your ‘to do’ list for your next three months?

In no particular order – supporting Ministerial engagements overseas and the International Education Senior Officials’ Group; giving practical effect to the Ministry’s own International Engagement Framework (which helps prioritise MOE’s international activities); finishing consultation on the new Code of Practice for the Pastoral Care of International Students (submissions close on 30 August!) and developing the new International Student Contracts Dispute Resolution Scheme; completing the Annual Report on the Export Education Levy; working with sector bodies to think about how to better enable New Zealand students to study overseas and New Zealand providers to deliver programmes offshore; looking at ways to commercialise New Zealand education agency know-how and intellectual property; two weeks in China on the ANZSOG China Reciprocal Program hosted by the Chinese Government... and participating in the NZIEC 2015 in Hamilton on 20-21 August, of course!