New Zealand education providers are invited to participate in the Latin America Study with New Zealand Virtual Fair on 28 April 2023.

“ENZ is seeking expressions of interest in the fair, which we are hosting in collaboration with FPP. If you are interested in participating, please fill out the Expression of Interest form by 9 December 2022.”

Invitations to register will follow in the new year.

Find out more about Latin America

Key areas of focus for ENZ in Latin America include Brazil, Colombia and Chile, and we have staff based in São Paulo and Santiago.

Close to 6,000 international students came to New Zealand from Latin America in 2019, and Brazil is our eighth largest market. Since the pandemic there has been intense activity from our competitors with many of them establishing in-country representatives, which demonstrates the importance of this region in international student recruitment.

Beyond student recruitment, ENZ also values the government and education connections with the region.

In June this year, Education Minister Chris Hipkins created great buzz with his visit to Brazil and Chile, part of his first international trip since the beginning of the pandemic.

Group recipients of the Prime Ministers’ Scholarships for Latin America have recently started making their way to Brazil, Colombia and Chile to participate in short study exchanges. These include several Māori led groups, supporting connections with indigenous nations in the region.

In September, ENZ attended the FPP Virtual Fair in Colombia. The fair had more than 800 visitors, with over 100 visiting the ENZ booth. There was strong interest in tertiary programmes and language studies. The virtual fair was a great opportunity to promote New Zealand as a study destination within the Latin American market. 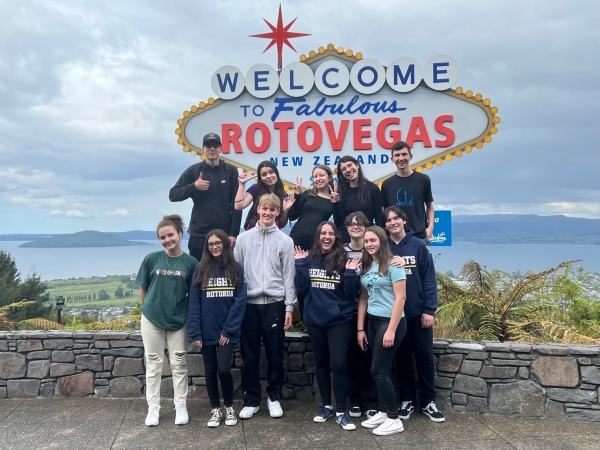 A group of 100 high school students from Paraná State in southern Brazil had a three-month study experience this year with schools in Auckland, Rotorua, Hawkes Bay, Palmerston North, Wellington, Canterbury and Invercargill.

In 2019, there were 3,324 Brazilian students studying in New Zealand. Being from non-English speaking countries, the majority of Latin American students will start their education experience in New Zealand studying English. Scholarships offered by the local state governments have also contributed to the presence of Brazilian students in New Zealand and in 2022, 100 students from the state of Parana in Brazil travelled to New Zealand on a 3-month exchange. The students were placed at high schools across the country and gave positive feedback about their time here.

Colombia is New Zealand’s second largest market in Latin America, second only to Brazil. In 2019, there were 1,360 Colombian students studying in New Zealand.

In 2023, 22 students from Bogotá, Colombia, will travel to New Zealand to study during terms one and two. Most of the students will be based at schools across the North Island, with one group heading down to Nelson.

On 23 November 2022, ENZ launched the I AM NEW campaign in Spanish at an event in Bogotá, to promote a New Zealand education.

The recent CAPE LatAm ‘Celebrating 50 years of diplomatic relations with Chile’ event, hosted at Parliament, was a great example of the rich history of connections between New Zealand and Chile.

Latam will be resuming their daily flights to Sydney via Auckland from mid-December and Qantas is flying three times per week from Santiago direct to Sydney. Although the cost of flights is high, in line with worldwide trends, the resumption of regular flights demonstrates the high demand for the Latin America to Oceania route.

Expressions of interest in the Latin America Study with New Zealand Virtual Fair are due by 9 December 2022. You can access the online form here.

If you have any questions about the event, please contact  latinamerica@enz.govt.nz