Former All Black star, Dan Carter, visited Japan earlier this month to take part in a charity event for Support Our Kids (SOK). SOK works with children deeply affected by the Tohoku earthquake of 2011, nurturing them to become future reconstruction leaders.

Former All Black star, Dan Carter, visited Japan earlier this month to take part in a charity event for Support Our Kids (SOK). SOK works with children deeply affected by the Tohoku earthquake of 2011, nurturing them to become future reconstruction leaders.

So far 296 children have taken part in the programme which is supported by 11 countries around the world including New Zealand.  Students get the opportunity to take part in two-week international exchanges focused on developing leadership skills and learning more about different cultures. They are placed with homestay families for the duration of their exchange.

Ian Kennedy, former New Zealand Ambassador to Japan, serves as the Honorary Chairman of SOK. The New Zealand Embassy in Tokyo has been a key supporter along with over 200 major Japanese corporations and organisations.

SOK and its sponsor companies hosted a series of events for Dan Carter including rugby clinics in three cities: Fukuoka, Kamaishi and Hachimantai. Fukuoka clinic included school children who had travelled from Kumamoto, a city that was hit by an earthquake in April.

"Dan’s support of the recovery and rebuilding efforts in the cities he visited as well as his dedication to supporting the Japanese youth has been amazing," said Misa Pitt ENZ Senior Market Development Manager Japan.

This year, Education New Zealand (ENZ) is sponsoring 10 SOK students who will arrive in New Zealand in August to take part in a one-day Game On English (GOE) taster programme at Canterbury Rugby Football Union, one of GOE’s rugby partners. The announcement was made during the charity auction dinner, where Dan met with the students and wished them all the best for their two weeks’ stay and study in Auckland and Christchurch.

GOE is an edu-sport programme combining New Zealand’s expertise in sports coaching with our world-class English language teaching. There is demand for this product given the Japan government’s goal to improve English language skills and increase sporting capacity in the lead up to hosting the 2019 Rugby World Cup and the 2020 Summer Olympics.

“ENZ really welcomes partnering with SOK," said Ms Pitt. "Rugby is a disciplined sport which promotes strong team work and leadership qualities. We hope the students will learn and gain lots from this experience.

"By working closely with the host cities of the Rugby World Cup in 2019, we hope to be able to identify new opportunities to introduce New Zealand’s expertise in English language teaching, rugby coaching, hospitality, tourism and other special areas,” said Ms Pitt. 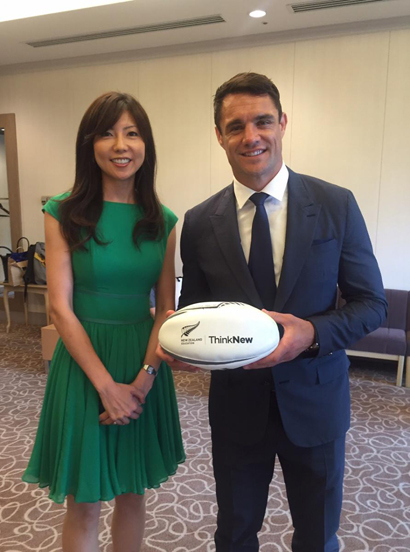