Over the past six months, ENZ has made a number of changes including to its Executive Team as we work to ensure we are best equipped to face the issues and opportunities in the sector.

ENZ’s three Regional Directors – Alex Grace for China and North Asia; John Laxon for South and South East Asia and Middle East; and Lisa Futschek for Europe and Americas – have been appointed to ENZ’s Executive Team. This will ensure that international market conditions and issues have greater visibility in our discussions and decisions.

Adele Bryant is preparing to take over the role of Regional Director, China and North Asia from Alex Grace who leaves ENZ in June. Adele brings a wealth of knowledge and experience to her new role including her significant achievements with the universities sector, and her international experience with the Ministry of Foreign Affairs and Trade before joining ENZ. Amongst her MFAT roles directly relevant to the ENZ Regional Director role, Adele worked as Head of the China Unit, was Consul General in Hong Kong and was Deputy Director APEC.  Adele will move to Beijing shortly.

Clive Jones is our new GM Strategy and Insight. This is a new role with an important mission to lead and coordinate ENZ’s strategic thinking, priority projects and major initiatives. He’ll be focusing on some key initiatives that have the potential to make a big difference for the future of international education. Clive was previously ENZ’s GM Business Development.

Greg Scott has been promoted to replace Clive as GM Industry Development. Greg was previously ENZ’s South Island Business Development Manager and led our Regional Partnership Programme. In his new role, Greg will lead ENZ’s team of business development and project managers, based in our four New Zealand offices, who are tasked with supporting international education providers to achieve sustainable industry growth across New Zealand.

As part of ENZ’s recently expanded focus on the entire ‘student journey’ – from ‘prospective student’ to ‘student experience’ to ‘alumni and advocate’, we have refocused our Student Marketing team around five areas: student acquisition; events and agents; student engagement; student experience; and student scholarships. 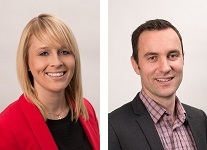 Hayley Shields has joined ENZ as Director of Student Experience. Hayley recently led international marketing and business development for the University of Auckland. She has had an extensive career in international education in Australia and New Zealand, including with University of New South Wales, University of Melbourne and CPA Australia. Based in Auckland, she will work with industry stakeholders, government and community agencies and students to deliver a shared vision of a unique and quality student experience for all international students. This work will be informed by the International Student Wellbeing Strategy, the development of which has been led by the Ministry of Education.